On July 31st, 2015, Gary and Taylor recognized the danger to an adult leader Vic Freestone who had lost control during a descent from their hike to the summit of Mt Princeton.

After recognizing the situation, Gary quickly reached out to stop Freestone but Freestone had too much momentum. This resulted in Gary’s glasses being knocked off, and a brush to his face by Freestone’s flailing arms. Taylor saw that his father attempt did not stop Freestone’s decent and tackled Freestone, after which both tumbled a few yards, with Freestone gashing his head but was stopped from the unsafe out of controlled descent towards danger.

“It could have been terrible, not just for me but for both of them,” Freestone said. “It worked out really well, and I’m grateful that they were there.”

Gary then joined his son Taylor as they used first aid treating the head wound/gash Freestone had suffered. After stabilizing Freestone’s wound, both Gary and Taylor assisted Freestone the remainder of the way down the mountain, stopping frequently to ensure a 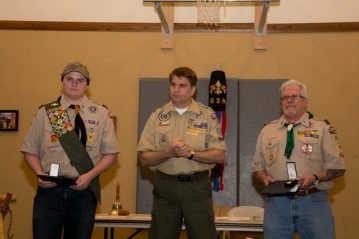 “I stuck to Vic like glue all the way because I was worried he had a concussion,” Taylor Morgan said. “We got down the mountain, but it took a while.”

Because of the heroism of Taylor and his father Gary at 14, 197 feet at the summit of MT. Princeton on that day, they were awarded the Honor Medal (Taylor) and the Medal of Merit (Gary) from the Boy Scouts of America on January 22nd, 2016 in Frisco, CO.